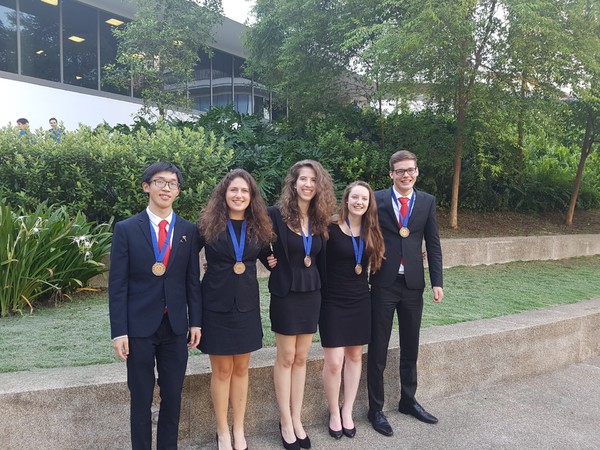 Once again, this year, 5 students had the privilege of representing Switzerland in the International Young Physicist's Tournament, which took place in Singapore: Zara Vance, Tehya Birch, Ivana Klasovita (all attending MNG, Rämibühl), Florian Würth (KZO) and Xiao Yu (Lyceum Alpinum Zuoz). Due to our success at the Swiss Young Physicist's Tournament in Lausanne and the following team qualification round in Zürich, we were chosen to travel to Singapore along with Eric Scherternleib (Team Leader) and Daniel Keller to go up against the 30 other participating countries. We were also accompanied by Samuel Byland (Juror) and Émilie Hertig (member of Team Switzerland 2016, Russia) and they played their part in helping us along during our adventure.

Each team member had to have solved 3 of the 17 physics problems before takeoff. That meant doing experiments, coming up with hypotheses, checking said hypotheses and either assuming them to be correct or discarding them and piecing together a theory as near to correct as possible. A nicely written and neat PowerPoint was a necessity. However, as it happened, most of the presentations were completed either on the plane or in one of the student bedrooms of the Residential College of the University of Singapore under much duress and a great lack of sleep...

The first round of Physics Fights went per expectations, and thanks to a reasonably high score we managed to begin our tournament placed 13th overall. The following round was a great disappointment: We slipped down into 18th place after a fight against the very strong team from Germany. Luckily, the afternoon was spent on an excursion and we were given time to tend our wounds. We drove into the city and visited firstly the ArtScience Museum, where we could set our inner child free and afterwards the Gardens by the Bay, which was a refreshingly cool, gigantic and impressive world of plants with a wonderful view over the city. In the evening, we were presented with and thoroughly enjoyed a typical Light-Show by the renowned Supertrees, accompanied by kitschy music in full swing.

After a pleasing third and fourth round, we had worked our way steadily up and chances of a silver medal could be seen on the horizon! Our motivation only grew heading into the fifth round, but unfortunately, this objective proved to be a little farfetched. Despite the disappointment, we were happy that the stress was over and of course, we were also very proud of our bronze medal. Most of the team spent the tour of the city the next day sleeping, since up until this point, 4 hours of sleep a night had been the absolute maximum... We enjoyed a lovely evening together with our teachers at their hotel, from who’s balcony one had an incredibly impressive view of Singapore by night.

We neared the end of our adventure in Singapore and after a closing ceremony filled with music and dance, it was almost time to head back on the long flight home. I would like to thank our leaders and my team members from the bottom of my heart for a fantastic time and many touching memories.

For the Swiss Team, Tehya Birch and Zara Vance